I've been spending a bit of time playing around with the Yahoo! products available through Yahoo!Xtra.

I generally use this at home on my mac and was kind of disappointed that Pro Mail was not officially compatible with either Safari or Firefox. It seems there have been some upgrades recently which means that this compatibility now exists - works much faster on both browsers making it a much more useful service.

I was talking to the team at Telecom about the roadmap for more improvements - can't say anything too specific about them, but from the screenshots I saw, the evolution of this product is simply stunning. Expect to see more this year with a more social networking orientation and a better calendar product as well. The speed they are moving at is phenomenal. They are embracing OpenId very enthusiastically so expect to see more of an ecosystem approach from the team at Y!. Interesting observation from our team - our use of webmail in NZ is really low compared to the US - wonder why that is?

There is a blog from their developers if you want to know more about what they are doing with the mail product.

The other piece of capability I have been playing with is Yahoo! pipes.

I found this while trying to get comments from Plaxo Pulse integrated into my blog (more on that later - it isn't quite working yet). Its a great piece of capability - allows me to build, manipulate and output feeds by dragging modules around, applying filters and connecting them up. Brilliant - even I can (kinda) make it work.

There are some real benefits to this relationship in terms of open-ness that we didn't see with our previous partner.
Posted by Miki Szikszai at 10:33 pm 4 comments: Links to this post

Living in Lowry Bay, we've been accustomed to relatively low broadband speeds of not much more than 1Mbps. This despite having a cabinet less than a km away. A couple of years ago while trialling IPTV services this annoyed not just myself but also my family as I was trying to get them to watch Video on Demand services with frequent buffering.
Up until now, I was of the opinion that this was a 'laws of physics' issue - copper wasn't in good enough condition to carry the bits fast enough. This was also because the modem I had was a Cisco unit which I considered to be state of the art - I mean if Cisco couldn't make it work, who could?
Until last week that is - I have been doing some work sourcing new modems for Telecom and thought I would try one out at home. Primary reason was that I had a separate Cisco WiFi point and modem and this was causing some clutter in the home office, so I thought an integrated device would make some sense.
I connected one up (brand yet to be disclosed - we haven't finalised commercials yet) and I was stunned to find I was operating at better than 4 Mbps. And I know we haven't been upgraded to DSL2+ yet.
Research indicates that the primary reason for the speed increase is that the modem is using a Broadcom chipset which matches what we use in the DSL cabinet down the road.
I have a few thoughts on this
1. I wanted to fix one problem and got a significant extra benefit for *free* - my clutter is seriously reduced and I have at least 3 times the broadband speed from previous. If that isn't keeping a customer happy then what is?
2. My experience in mobile is strangely much more robust - devices pretty much operate at maximum bandwidth. This is because they all have the same Qualcomm chipset (small exception where Nokia was operating their chipset for a while for CDMA 1x). While the Qualcomm model is more monopolistic it does ensure standardisation - which means things work better and more consistently. We all fear this from time to time, but the downside of choice is that you have to integrate more and more things go wrong. Having one supplier at either end of an important link makes things work better.
3. Taking the mobile argument on another step, I used to think that CDMA was a fragmented standard (it is - trust me), however broadband is much more so. It has not matured yet to the state where it is like GSM - hard to know whether what you have bought (or what your Telco has recommended) will work that well.
4. The speed makes a difference - streaming video from local sites is snappier, sites load faster, and I can even stream sport in watchable quality. Might even consider getting a faster upload plan now.
Overall lesson - check your modem has a Broadcom chipset. If not consider upgrading to one that does - you'll be pleasantly surprised.
Posted by Miki Szikszai at 9:40 pm No comments: Links to this post

Today is my last day at Next Generation Telecom.

I've been working on this programme for the last 18 months or so and we've been able to get it from the feasibility work completed by Group Strategy, through a very rigorous design phase now going into Build.

It's been a hard road - we had quite a frustrating period as we went through the change in leadership at Telecom. It was necessary - we weren't really ready to move forward.
I am personally very pleased at where we've ended up.

NGT was described in the investor briefing session yesterday. There is a lot sitting behind this slide which comes from the Retail Briefing. 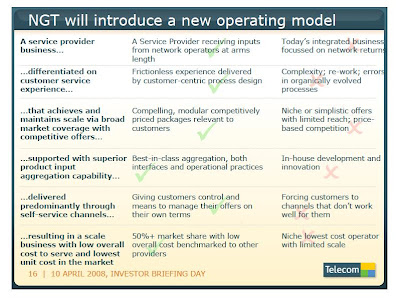 We started this phase with 3 of us in a room having 2 'AHA' moments.

1. We will not be able to compete as a Retailer in the market on product differentiation based on Network. Everyone can pretty much have the same stuff. What we can differentiate on is service.

2. We don't know how to design 'properly' for the customer - we have to learn.

We now have a team of close to 100 including our partners at Tech Mahindra, we have a brand promise that we are designing for that will be a game changer in NZ. The people building NGT are now first and foremost advocates for the customer and have the skills and capability to make that work for NZ. We have personas we are designing to, we are directly validating our design with customers, we are constantly challenging what we are doing to deliver to the customer. This is a very different Telecom.
It's been a privilege for me to be part of this team - I have learned a lot and worked with some amazing people. Thank you.
I'll be taking some time out from today and working with the Retail Broadband business at Telecom until the end of June. The rest of the year I will have my hands full with 2 year old Ella and trying to turn a couple of good ideas into good businesses.
Posted by Miki Szikszai at 9:41 am No comments: Links to this post 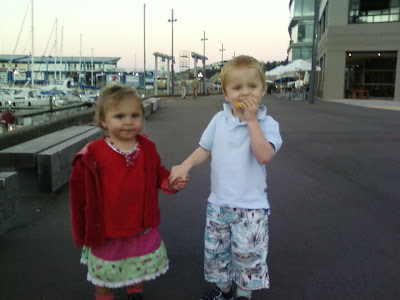 Cracker day today - Ella's 2 year old birthday. Highlight was cruising around Oriental Bay with her older cousin Kaspar. This photo taken after they had pretty much outstayed their welcome at the local F n C shop....
Posted by Miki Szikszai at 8:25 pm No comments: Links to this post